Business Bills of the Future

How expensive will it be to run a business in five or ten years?

Whether you’re a start-up, a growing small business, or an established business, the running costs are at the forefront of your mind, no matter your size. This is why we’ve conducted a study which looks at some common costs of running a business, from business taxes to gas and electricity supply, to help give you an indication of how much running your business in the future could be.

Certain business bills could double over the next ten years

Looking at historical data and the trends we see, we’ve calculated the average estimated figures for the next five and ten years in business to show you what you could be paying for some of your most common business bills.

Over the last 10 years, Corporation Tax has in fact been going down, but in the latest announcement by the Councillor of the Exchequer, Corporation Tax is going up in 2023 to 25% and we can only assume that this would be the case 3 years later in 2025. 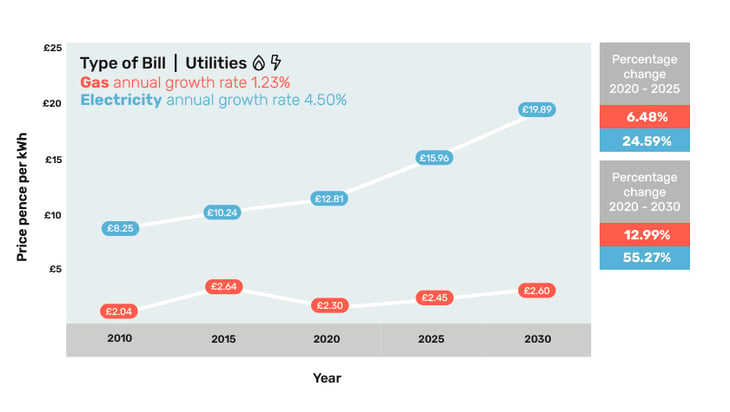 One of the lowest increasing bills could be your gas and electricity utility bills. With only a 6.48% projected increase in gas over the next 5 years and a 12.99% increase in electricity over the same period, keeping the office lights on and warm might not cost you much more than it does today. 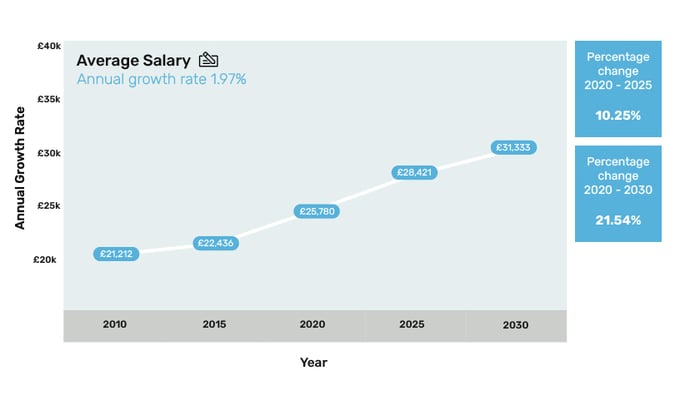 Another one of the lowest increasing bills could be the cost of the average salary of an employee. Over the next five and ten years, average annual salaries may only increase by 10.25% and 21.54% respectively.

The final bill we researched was the cost of office equipment, more specifically the cost of a MacBook laptop. Incredibly, in 10 years, the cost of each MacBook you will need to buy for your employees could increase by nearly 60%, making them over £2000 per laptop to equip your staff with the ideal equipment for their role. 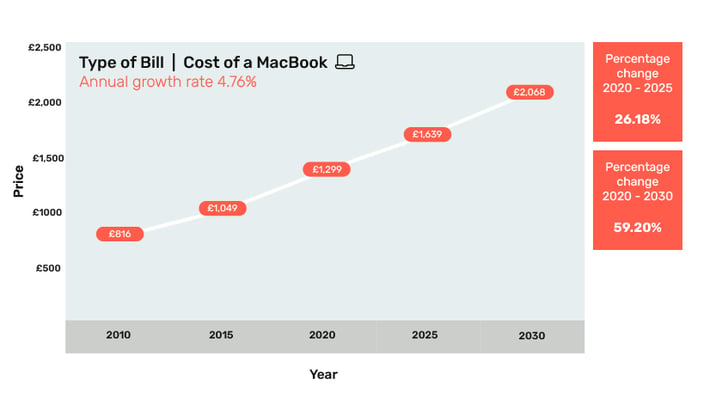 Interestingly the lowest price increase could be your gas supply which only increased at a rate of 1.23% per year over the last ten years, which would be an increase of just 0.15 pence per kWh by 2031. 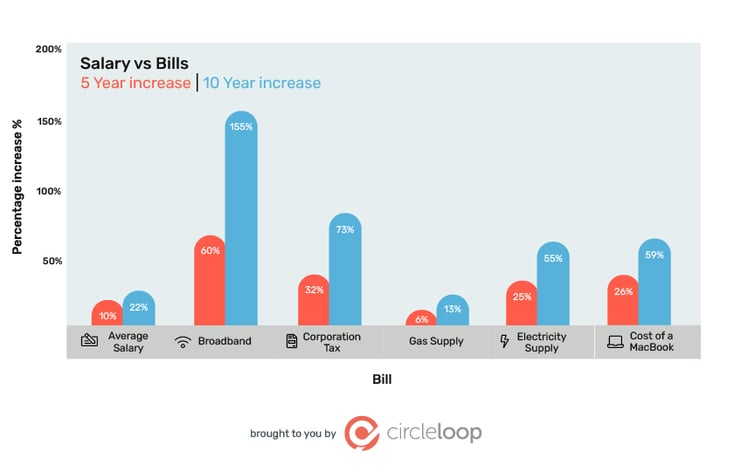 Even though these bills won’t change the most or the least in the future, there could be some quite significant increases in your most common bills in the next 10 years.

For example, the cost of your electricity and the price of a new Apple MacBook could increase by over double (55% and 59% respectively) over the next 10 years. On the other hand, average annual salaries could potentially grow by 1.97% meaning the average annual salary could be up to £31,333 in 2030.

Other business bills you’ll likely save on.

It’s not all doom and gloom, the continued evolution of the Software as a Service (SaaS)

In the modern world we now operate within, it’s quite simple and cost-effective for anyone to start a new business, however, in certain areas costs continue to increase and need to be fully considered before setting out on your startup journey.  In particular recent taxation changes are worth noting, however, our ever-increasing dependency on agile business software products delivered in a Software as a Service (SaaS) model continues to allow SMEs to gain to access enterprise-grade functionality with ease - products such as Shopify for eCommerce or Stripe for online payments or of course, CircleLoop for business communication.

More and more businesses are using less traditional forms of communication, so where businesses would previously be paying out for traditional phone systems in their offices, employees can maximise productivity and work anywhere in the post COVID world through web-based applications on the devices they already own.

“There are several other areas within a business that owners and entrepreneurs are now also looking to in order to cut back on costs. These include the use of co-working spaces to provide a flexible base for those employees who might be looking for a mix of both remote working, and office working. Similarly, small businesses can look to outsource employees through freelancing and contracting platforms such as Fiverr in order to save on the costs of full-time employees.

We took five of the most common costs a business will incur every year: Corporation Tax, gas supply, electricity supply, annual salary and broadband. We used the following sources for each to uncover the historical and present price for each outgoing. These then allowed us to calculate the compound annual growth rate over the last ten years and apply this increase for the next five and ten years.

Also to note, we calculated the compound annual growth rate (representing the growth interest rate that takes into account compounding) to predict the future cost of bills that businesses commonly pay. This works out at the following CAGR % increases for each bill: